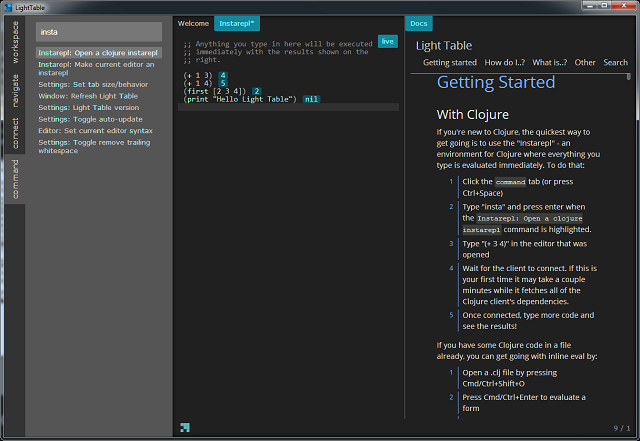 Light Table is a new, work-in-progress IDE just blew my mind. The new concepts and GUI introduced are simply great. I can't stop from loving it, specially being very Clojure-oriented, although it aims to be a generic IDE. The live code evaluation as well as instant documentation access are very very nice features, as well as other excellent ideas you'll find if you try it (even if "all ideas are old ideas"). It is avaialble for forking in GitHub if you're interested in helping developing this awesome IDE.
(Does not need any previous Clojure installation)

A very very interesting project, Nightcode aims at creating an IDE for Clojure (and Java too, but really the Clojure part is what is interesting). It is itself is a JAR file made mostly in Clojure, with some Java parts. The IDE offers several options for a new project:
It's still a new project (current version is 0.0.1) so the IDE itself is pretty simple for now, the available options are pretty basic, but it looks very promising, specially for focusing on such a future language as Clojure. Hope this gets better and better with everybody's help, because Nightcode is open source at GitHub.
(Does not need any previous Clojure installation)

This is the Eclipse plugin for Clojure. Being primarly an Eclipse developer, this is the first Clojure environment I tried. The plugin is fine but IMHO still has some bugs (like spawning a new REPL each time...) that make it not usable for serious work. Besides requiring Eclipse to use it, of course...
(Does need previous Clojure installation)

As for the other major Java IDEs, Netbeans also has its own Clojure plugin, Enclojure, which looks like abandonned right now (last update was 2009).
Labels: clojure ide programming